Born in Buffalo, NY, in 1971 Robert J. D’Alimonte (Tuscarora, Beaver Clan), grew up in a family of artists. His grandfather, renowned artist Stan Hill, began a career in bone and antler carving after the death of his son in 1970. Over the next 30 years, Stan created one-of-a-kind pieces of art that can now be found in museums and private collections throughout the United States and Canada. Stan’s work inspired the entire family to become active in Haudenosaunee art. Stan’s sons Russell Hill and Stan Hill, Jr., are both accomplished bone carvers. Rick Hill is a painter, author, and educator, and Janet (Robert’s mother) creates various craft items, including dream catchers and feather earrings.

“My work provides a way to connect to my culture and express who I am as a Native person. I enjoy creating pieces that tie together our rich Haudenosaunee heritage with more contemporary designs. My hope is to create pieces to which people feel connected.”

Robert is a completely self-taught artist. It wasn’t until he was in his thirties, shortly after the death of his grandfather, that he began to seriously learn the craft of woodworking. Using a scroll saw as his primary tool, he creates intricate fretwork, silhouettes,  and intarsia. His work ranges from his smaller, delicate wooden ornaments, to table toppers, portraits, and larger wall murals.

In June 2013, after a 20-year career working as a Software Architect for Western New York Health Insurance Companies, Robert resigned from his position to focus 100% of his time on his fledgling woodworking business.

“Designing software is a highly technical yet creative endeavor. I enjoyed it for many years and was fairly adept at it. However, after 20 years, the work lost its luster for me. I needed to do something that expressed who I am as a Native person. Something that helped keep our culture alive. And something that honored my grandfather’s legacy.”

Robert’s work can be found in a number of museum craft stores, including the Seneca-Iroquois National Museum in Salamanca, NY, the Iroquois Museum in Howe’s Cave, NY, and the Fenimore Cooper Museum in Cooperstown, NY. He travels the local craft show and pow wow circuit and is currently working on a project to create a permanent studio, craft store, and education center in Niagara County.

“I believe our future success as a people lies in part in our ability to continue to express ourselves through art. We must continuously raise the bar and educate ourselves in order to compete and succeed as artists. In the end, though, hard work and determination are the keys. That’s one of the best lessons I learned from my grandfather.” 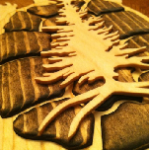 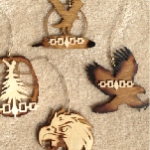 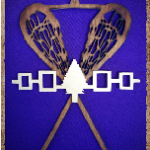 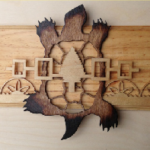