Erwin Printup is a member of the Bear Clan, Cayuga Nation, was born in Niagara Falls and raised on the Tuscarora Reservation. Erwin began his career in his teens when he studied stone carving with Duffy Wilson. He then began painting in 1979 with Haudenosaunee (Iroquois) culture being his inspiration. In 1991, he received his Associates of Fine Arts degree from the Institute of American Indian Arts, Santa Fe, New Mexico.

In 1994, Erwin was selected to illustrate Jake Swamps book “Giving Thanks”. In 1995, the book was published by Lee and Low Books and was featured on the PBS television show “Reading Rainbow”. Then in 1997, “Giving Thanks” was made into a video by Weston Woods Studio animating Erwin’s illustrations. In 1998, Erwin had an illustration included in another Lee and Low book, “America”.

Erwin Printup has shown his work internationally and has worked in many different medias such as metal and soapstone sculpture, traditional pottery, print making and silver jewelry, however, he prefers painting with acrylic on canvas.
More recently in 2005, Lee and Low named Erwin on of their top ten artists for their ten year anniversary.

In 2007, Erwin played a significant role as illustrator, curator and exhibitor at the Native American exhibit “Many Winters Ago” at the
Castellani Art Gallery at Niagara University in Niagara Falls, New York. 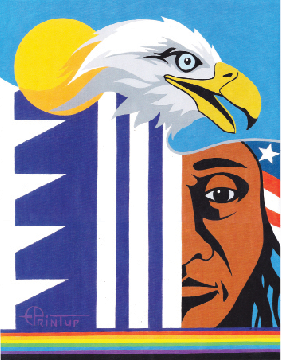 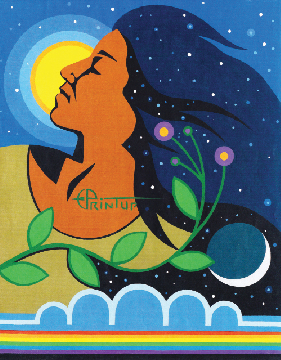